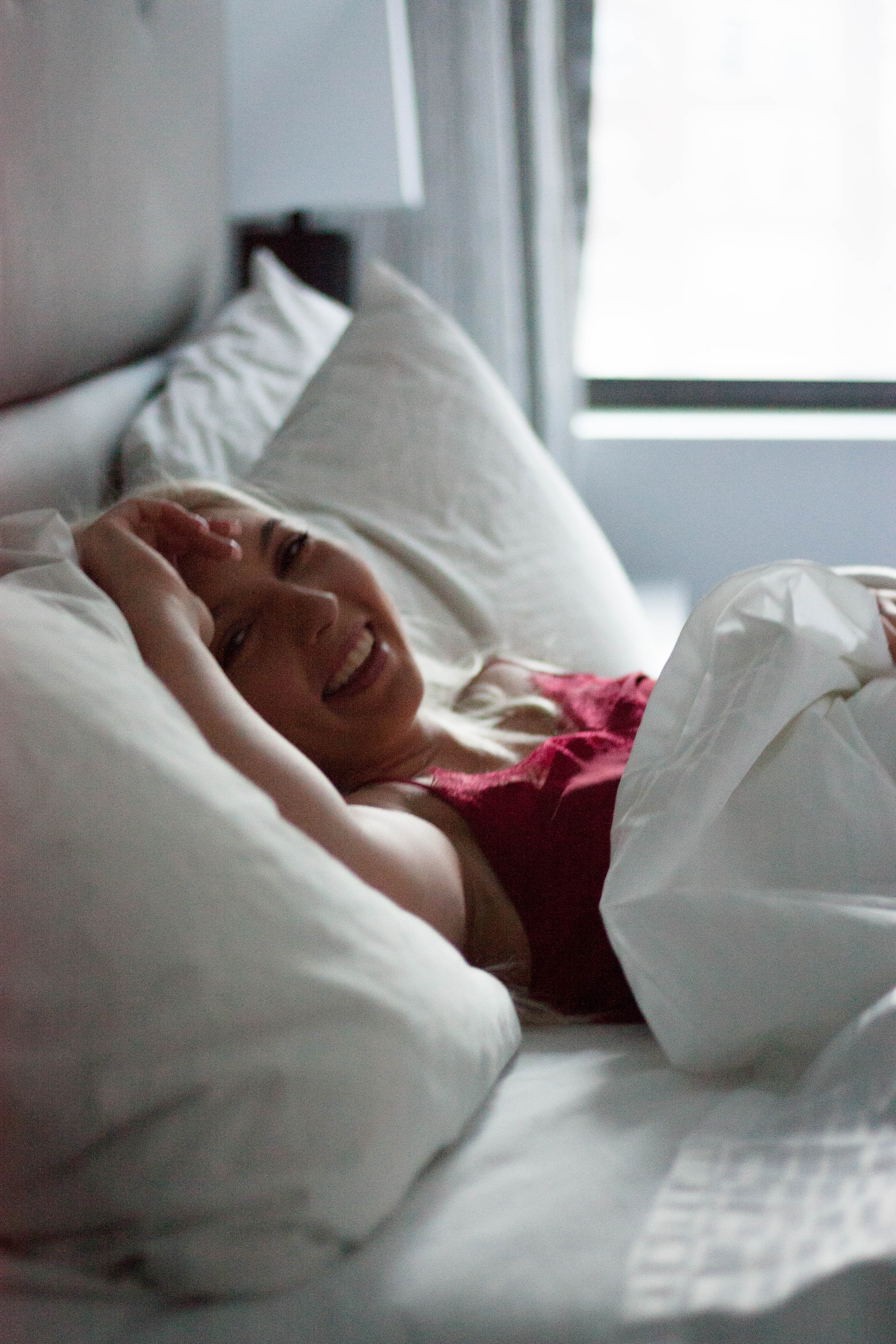 A few weeks ago Dan and I celebrated our love on Valentine’s Day with a little getaway to downtown Omaha at Hotel Deco.  I received so many questions after sharing our stay on Snapchat, so I just wanted to do a little recap on our experience.

Staycations are really nice because you don’t have to deal with travel time or expenses, but it still feels like a little getaway from home. You’re staying in another place, by yourself, secluded from any distractions; I highly recommend it.

Hotel Deco was unlike any hotel I’ve ever stayed in. The boutique hotel was built in 1930 and influenced by the Art Deco* style of the Nebraska State Capital. It was originally designated as an office building, called Redick Tower, with a large integrated parking garage. In 1989, the building was converted to a hotel and later purchased by the present owners in 2010 who named it Hotel Deco. The entire building went through extensive renovations and upgrades — all reminiscent of Art Deco style — to be what it is today.

The caliber of the upgrades to Hotel Deco has benefited the commitment to providing luxurious and exquisite amenities, gracious service, and an extraordinary experience for its guests.

Their commitment to gracious service certainly shined during our stay. From an issue I had with the room key to room service and general hospitality, the Hotel Deco team was a pleasure to stay with. The detail of the hotel’s design was really beautiful, too.

Boutique hotels are my favorite because there’s so much care put into every detail. They are always so unique in their own design style and amenities. They are just a different kind of experience. I would choose a boutique any day.

We loved how spacious our room was! We opted for the King Suite, which was only about $10 more than the regular rooms. I would highly recommend the upgrade, because why not? The larger suite included sitting area with its own TV, wetbar/counter space and full closet, desk, a king bed with another TV and a {smallish} bathroom with a large shower with 5 water horizontal jets, a removable handheld shower head and a rainfall shower head above. Ultimate #showergoals. Dan and I were both ruined for regular showers.

When I arrived, I parked my car with their valet service. This was a very nice feature because I don’t love trying to find parking (or trying and failing to parallel park) and taking all that stress out of it just put me even more at ease. The valet was an extra fee, which I came to find out when we got the bill for our stay. There isn’t a sign anywhere indicating the cost and they didn’t tell me either. I guess I could’ve asked.

I was all by myself when I arrived and obviously brought way too much stuff. I’m a chronic overpacker and apparently this applies to overnight stays as well. I didn’t really know what I was going to wear, so I packed all of it. The hotel manager helped me load all of my stuff onto a cart for easy transport. I checked in easily, helped myself to some complimentary infused water and she offered to help me up to the room, but I told her I could manage. I obviously couldn’t.

I get upstairs and the hallway had some steps leading up to my room, so I had to ditch the bellhop and carry my belongings the rest of the way. Then my key didn’t work. I called up to the front desk and they rushed another one up to me. Bless them. While I was waiting for the key with all of my crap sitting in front of the door I did a little wandering and guess. what. I. found. A RAMP. If I had exited the elevator to the left instead of the right, I would have been able to cart everything right up the ramp and into my room. But my life doesn’t work that way. {Snapchat recap below} Finally, I get into the room and it’s BEAUTIFUL. The room was a mixture of reds and blacks with so much space and light. We had the corner room, so there were windows everywhere. The room overlooked the scenic downtown Omaha area, with a view of the Woodman and First National towers. I spent a peaceful day just working on some things, free of distractions.

But first, room service coffee. And it was $12…but it’s whatevs.

After what seemed like forever, it was DATE TIME! Dan joined me after work for our dinner reservation at the hotel’s brand new restaurant, Monarch Prime and Bar, a modern steakhouse. Monarch is known for their locally raised dry aged meats — including beef, bison and duck. Their signature dish: an aged long-bone Ribeye, called the Tomahawk Chop. At 45 ounces, it will feed a whole table!

They were having a Valentine’s special Prix Fixe menu that evening, which is actually why we decided to stay at the hotel in the first place. Monarch just opened their doors for the first time in late October and I have been dyinggggg to try it since they advertised the opening on Facebook.

Monarch is located right inside Hotel Deco, so we didn’t even have to go outside in the cold {making the outfit choice pretty easy}. The lobby of the restaurant doubles as an extension of the hotel lobby. As with the rest of the hotel, the restaurant was also beautifully designed. The restaurant begins at the lobby. Then there’s the ornate bar, which stretches to the ceiling with shelves of liquor, dripping in gold and mirrors. The cocktail menu is experimental and inventive, with a variety of signature cocktails.

And then there’s the restaurant. Stepping through a doorway from the bar and walking down the steps is like stepping into another world. The whimsy of the decor in the restaurant is reminiscent of an Alice in Wonderland scene. The artwork on the main wall is a surreal floral landscape. Everything is blues and yellows and pinks. It’s so beautiful and so romantic. The restaurant is also dimly lit to set the mood.

We both ordered almost exactly the same meal from their special Valentine’s menu. First, they brought out the amuse bouche (a chef-selected bite size appetizer before the real appetizer – btw this was an HQ question and I knew what it was!) {compliments of the chef} which was a savory and sweet macaroon with chicken liver mousse in the middle, served on the cutest plate. It sounds weird, but it was actually sooo good. I had stepped away from the table when it was delivered and had no idea it would be savory when I bit into it. Seriously, though it’s a yes from me. Next, we had the foie gras as an appie. For those that don’t know, foie gras is duck liver. I know, everything sounds better in French. This dish came with a little crisp that I assume was meant for breaking up and scooping. The dish was also served with some pearl onions and dots of raspberry compote. A combination of amazing flavor.

I’m already picturing some of my friends disgusted by this meal, but seriously it was amaze. I ordered the Mushroom Consommé and he opted for the Wedge. We both ordered the Scallop dish topped with caviar {at an additional cost} for our main course, with a Rosé as the wine pairing. I was surprised when it came out to be a pasta dish {that’s what garganelli is, I had no idea}. It was also amazing — black garganelli noodles coated in a spicy arrabbiata red sauce topped with broccolini, scallops and caviar — and I could’ve had two more of them. We finished off with the Strawberry Shortcake almost too pretty to eat. It had a little disk of white chocolate, my fave. The entire dining experience was wonderful and we will definitely be coming back (as soon as we financially recover from this visit). The check was brought in a blank guest book that people can sign and write positive messages in. I’ve seen this before at one other restaurant in KC and absolutely LOVE this idea. The longer the restaurant is open, the more special this becomes. The books will eventually fill up with names and memories. It’s the sweetest. {yes, I spelled definitely wrong on accident…we don’t need to make a thing of it}

After dinner we were full {and broke}, so we went back to the room to spend some time together. For Valentine’s Day, I picked up this book at Francesca’s that we could fill out together. It basically goes through our love story; how we met, what we first thought about each other, etc. And then it keeps going on into our future love story — our wedding day, kids, etc. — for us to fill out in the years to come.

Dan fell asleep pretty early {we put on Titantic and he was asleep before Titanic left the harbor…you feel?} and I started to get the late night munchies, so I ordered some room service. I ordered their version of a Patty Melt, which was actually marinated shredded beef, pickled onions and ricotta cheese on a large piece of toast, with a side of green tomato jam and some frites. Not a patty melt, but still very good! It was the perfect cap to the perfect date night. He never woke up through all of the room service commotion, either.

We cannot thank Hotel Deco enough for the most incredible and romantic Valentine’s Day Getaway this year. Hotel Deco and Monarch Prime and Bar offer accommodations year round. Check them out if you live in or are visiting Omaha. This was DEFINITELY a Valentine’s Day we will never forget…although Danny will remember it differently because he paid.

I want to know what your favorite Valentine’s Day memories are! Leave me a comment below and don’t forget to follow my Facebook page for updates on new posts!

Thanks for reading babes! 8 ways I motivate myself to work out