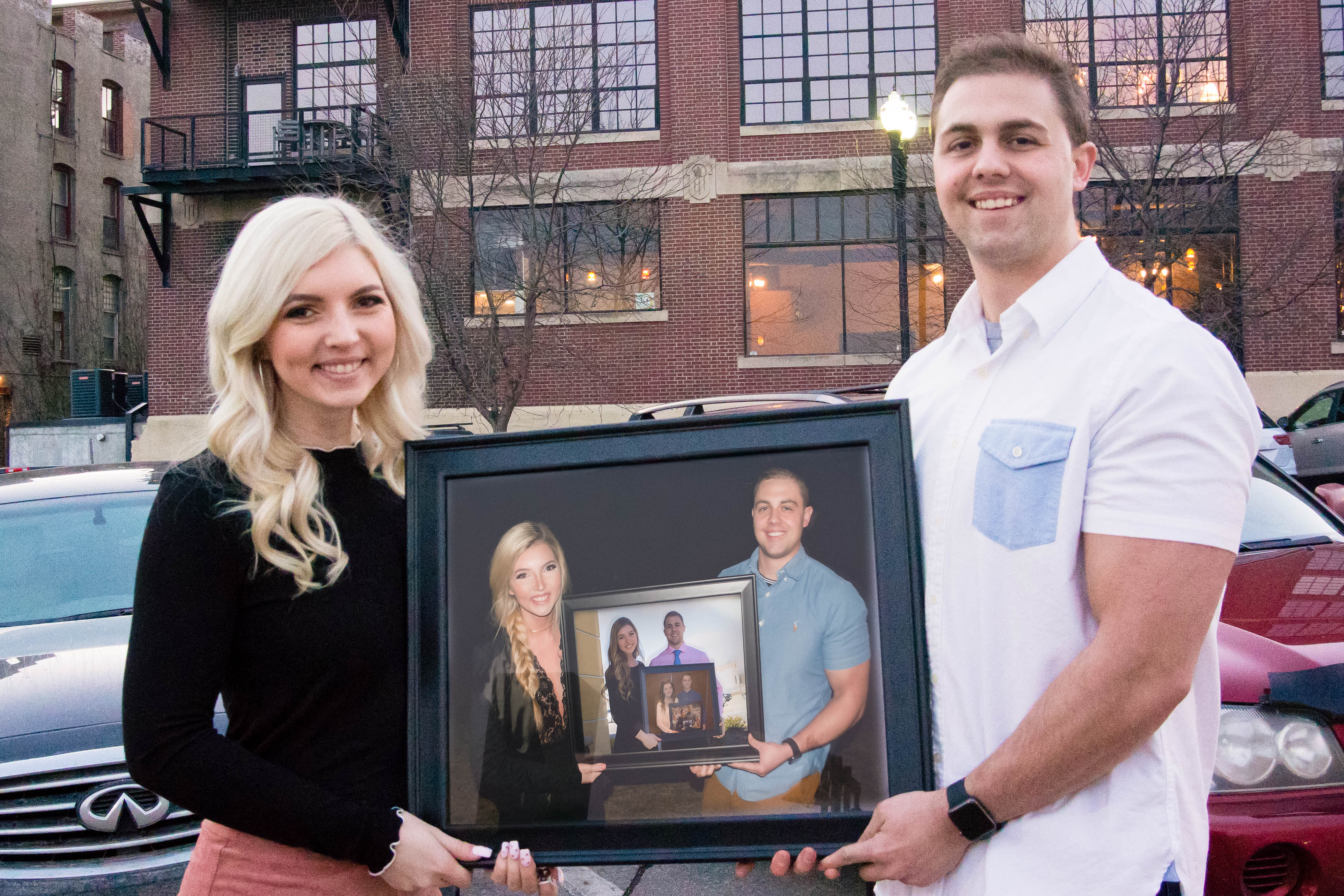 Today is our 8 year anniversary! YAS. It really doesn’t feel like it’s been that long, but eight years can go by really quick when you’re having fun with your best friend.

To celebrate today, I’m sharing 8 things you probably didn’t know about us.

1. We started dating in high school, but we actually met in middle school.

He had just transferred schools and was in my math class. The first thing he said to me was “Do you want to join the fruit club? I’m king banana!” I thought he was a weirdo and declined. We didn’t really talk again until high school. 2. Our first date (2.27.10) was at Olive Garden and then we went back to his house and watched The Strangers.

My arm was in a cast at the time (snowboarding accident) and even though we had been friends for over a year, dinner was super awkward. We watched The Strangers because he wanted me to be scared and cuddle up next to him. After the movie, we had our first kiss and then he asked me to be his girlfriend. 3. Our “how we got together” story wasn’t a straight path to dating, there were a lot of twists and turns that led up to it.

During freshmen year of high school, we would hang out at all of the football games together. It was probably the highlight of my week and when I realized I first liked him. He took forever to actually ask me out, though, and I ended up dating someone else because I didn’t think he liked me. That relationship lasted about 2 months. Broke up. Dated someone else for 5 months. Broke up. But I still liked him. Even during these relationships, we were still friends and ate lunch together every day.

After my second relationship, I just wanted to take a break from dating anyone. I still talked to Danny all the time.

It started going around that he liked me and his friend asked me if I liked him. Because I didn’t want everyone to be talking about us and rumors going around, I told his friend ‘No.’ I wanted it to come from me. That night, he wouldn’t respond to any of my texts or calls. I knew I made a mistake and I was trying to fix it, but he wouldn’t even talk to me. It was winter break and I wouldn’t see him at school either.

During the time he was talking to me, he was also talking to another girl within his friend group. I’m not exactly sure the events that occurred within this time, but he started dating her over the break. He still wasn’t responding to me.

I found out he was in a relationship with this girl and I sent him the longest, nastiest text going off on him. I was so mad that he wouldn’t respond to me this whole time when I could’ve fixed the entire misunderstanding. He was mad after that. I don’t remember the exact message he responded with, but it was something like “How dare you…” “I’m dating ****** now and that’s it.”

This is going to sound bad, but I had to get him back. I knew he was supposed to be with me.

I was supposed to be in a cooking class that semester, but I knew he was in study hall at that time, so I dropped the class. I had to be around him as much as possible to remind him that he actually liked me. Being apart is what cause this whole mess in the first place.

He started calling me again. When we first started talking, he called me on the phone a lot. We would talk forever, all night sometimes. He wasn’t happy in his relationship. He thought she liked his friend. But, painfully for me, he kept trying to make it work with her. I knew I had a chance when he called me one night and said, “You know I still like you, right?”

TWO WHOLE MONTHS later, after Valentine’s Day, I was about to give up. He kept trying to make it work with a girl that clearly wasn’t into him and would only show him affection when I was around.

I went over to his house one night to “study.” We just ended up watching TV the whole time. (If you don’t follow…yes, he was still dating her.) When it was almost time to go, I was just sitting there thinking about everything and got really sad and laid on him. I didn’t want to let him go. He didn’t want to let me go either. He told me he was going to break up with her the next day. I wasn’t sure if I believed him. I told myself if he didn’t, I was done.

The next morning I walk by them talking by his locker. I still wasn’t sure if he was actually doing it. BUT HE DID. That same day he asked me on a date for Saturday. We kept our relationship a secret for a week, because we didn’t want it to look bad among his friends. It still did. He took me bowling and I was clueless. 5. We’ve never had a true fight and have never argued about something more than a couple hours. We have also never broken up or taken a break.

He never lets me be mad at him. It’s annoying sometimes, but it actually works. 6. Our favorite things to do together: get brunch, work out, go on walks, travel and binge-watch new Netflix shows. 7. He calls me Peanut, Chickie and Stinker. I call him Mister and Duckie. 8. We’re not engaged or even thinking about getting engaged or married yet. We want to get a house first.

We’ve been together so long that we know we’re going to get married someday. We just don’t need the validation of getting married to know that we will be together forever. We both want a nice wedding because we’re only planning on getting married once. We just want to wait until we have the money to do it right. I grow more and more in love with Dan every year and I’m so happy to be dating my best friend! Happy Anniversary, babe.