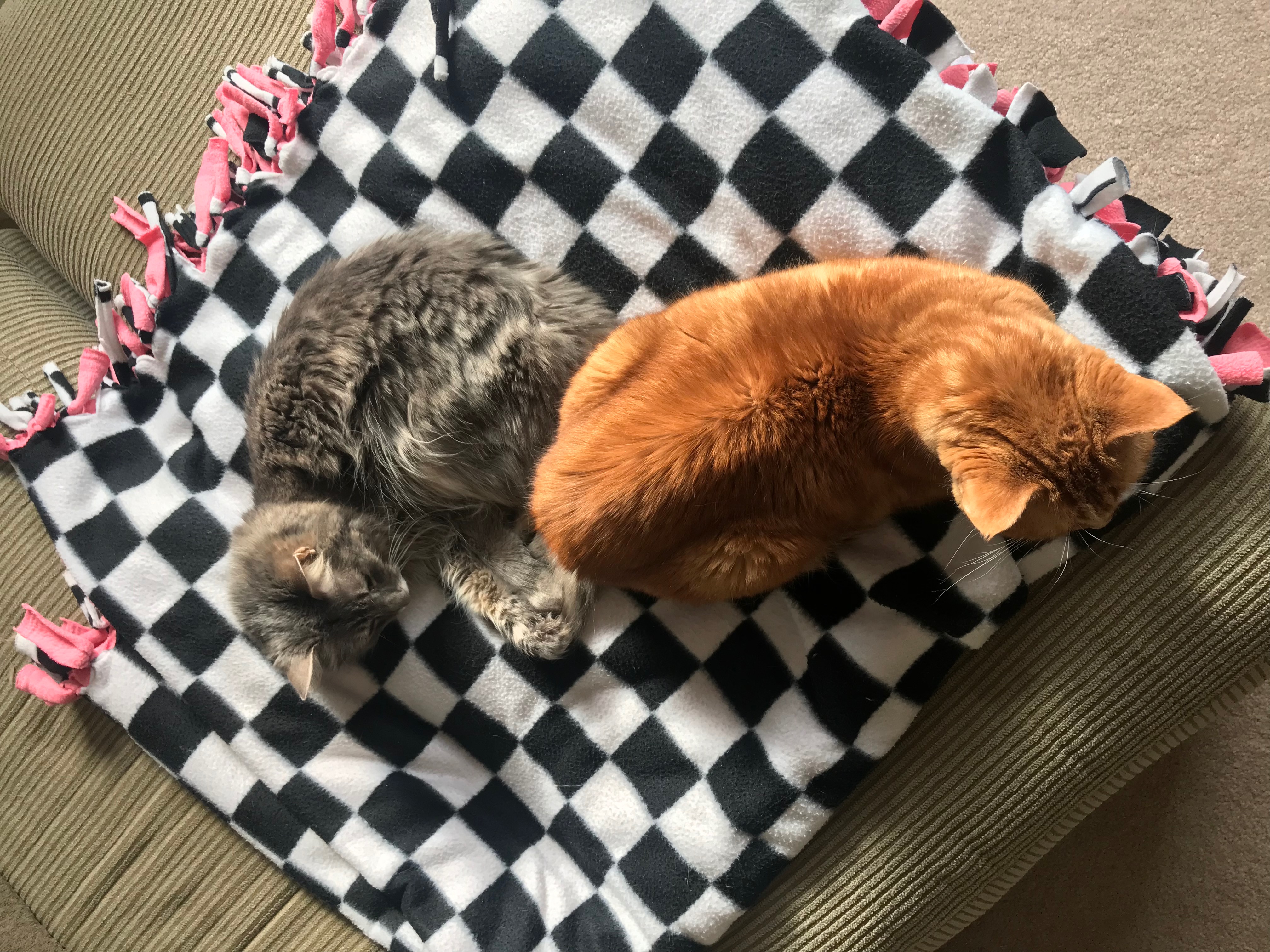 Every time I sat down to write this, I cried.

I started writing about my cats when I had two cats, now I have one. What I originally wrote was fun and happy, but it doesn’t make sense now.

I said goodbye my best pal, Max, on Monday. It was probably the hardest thing I’ve had to do. He was my first childhood cat and he has been in my life as long as I can remember. It doesn’t seem real that he’s gone. That I’ll never see him again.

I can’t believe how unbelievably lucky my family was to find a cat as great as Max. I have seen that cat turn everyone he meets into cat lovers. People that don’t even like cats, loved Max. He was such a good boy.

If you don’t have any cats or are not a cat person, you’re not really going to get it. Anyone that knows me knows I have an overwhelming love for cats. My cats are a big part of my life. I love all cats, but my cats are my family. Max was my family.

I may have had cats before him, but he was my first childhood cat. My first new kitten. The first cat I had from beginning to end. He will always be in my heart. We adopted Max in 2004. I was 9 and we had just lost our cat, Sam. My dad wanted an orange cat, no matter what. Sam was orange. It was kitten season and we stopped at this little pet store in Millard. They had 3 or 4 kittens for adoption, all from the same litter. My dad picked up Max immediately and said “We’re getting this cat and his name is Max, he looks like a Max.” That was it, we were getting Max. He was so beautiful with fire orange, striped fur, white paws and bright blue eyes. We were also obsessed with a peach-colored kitten, his brother. Max was beautiful, but this one was just so cute and dainty. We got two kittens that day. We named our other kitty Nigel, after the bird on Finding Nemo.

Max and Nigel were the best little buddies. They LOVED each other. We had another kitty at the time, a Siamese named Ruby. She didn’t like many people. Maxi and Ni Ni were crazy little kittens. They got into everything and explored everywhere in our house. They loved to play and snuggle with each other. I don’t remember much from that time, but I always had scratches up my arms from the two of them. One day, a few years later, we drove out to a farm in the middle of nowhere and picked up a fourth kitty. We wanted a girl kitty this time, so we picked the littlest grey one and named her Jasmine, after the Disney princess.

When it was time to get little Jaz spayed, we found out SHE was actually a HE.

We obviously couldn’t keep calling our boy cat Jasmine, but we struggled for a while to figure out what to call him. We all joked that he was “Jazz-man” now. Finally my dad just started calling him Jackson (because it was the closet name) and it just kind of stuck. Now we had a little Jackie.

Jackson was the littlest kitten and he stayed little. He is one of the smallest cats I have ever seen and my entire family is obsessed with him.

Jackson and Nigel were also best buds. We used to joke that Jackson thought Nigel was his mother because he was always by his side. Ruby got too old (19) and we had to give up Nigel. Then there were two.

Max had a pretty obsessive personality, similar to most of my family. He loved a few things and he loved them HARD. He loved sticking his face in people’s shoes and breathing in foot smells. He loved to sit on my lap when I was on the toilet. He loved chewing on foam things, mostly flip flops. He loved fresh water, preferably with ice in it. More than anything he loved head scratches and loves. He loved people, because people meant head scratches. And he loved all of us.

He hated being picked up. He would get all panicked and squirmy, jabbing at you until you put him down. If you gave him scratches while you were holding him he might let you hold him for a minute.

I felt sorry when he was sick because he didn’t want us to touch him anymore, it hurt him too much. But that’s all I wanted to do. I just wanted to pet him a few last times, hoping he enjoyed it at least a little.

For the past couple months, Max has been declining in health. We first noticed when all he cared about was drinking water. He would spend his entire day going back and forth between the water bowls and his entire night sleeping with his head in the dish. I took him to the vet and they said his kidney levels were a little off, but he was fine. They told us to just feed him more wet food.

A month later he’s still being weird and now he isn’t cleaning himself, he’s peeing on everything and is losing tons of weight — he used to be so fat. I take him to the animal hospital this time and they tell me he has pancreatitis and give me medicine to treat that. He should be better in two weeks, they say.

One week goes by and we notice that the inside of his back leg is stripped of hair, infected and gross. He has been sucking on it.

I take him back in and they say that is a sign of Lupus or another autoimmune disorder. They keep him over the weekend to treat the wound and make sure he doesn’t pick at it again. They also gave him a steroid shot to treat the Lupus. When I picked him up, they said he was peeing in the litter box and doing really well in general. We thought he was back to normal.

At home it’s a different story. He’s peeing everywhere again and two days later his leg is looking worse rather than better. I take him back to the vet. This time she tells me that since none of those treatments worked and he’s continuing to lose weight, it’s probably lymphoma.

Cancer. Max had cancer. I lost it. Danny lost it. There was nothing more we could do. We knew it.

This moment came on so suddenly. For weeks we had hope that we could treat whatever was wrong with him. Every time we went to the vet they told us it was just minor problems that could be treated with meds. This day,

Max never did anything wrong to anyone, he was always always always so sweet. And the way he was suffering was absolutely heartbreaking. We had to take him home for the weekend so the whole family could say goodbye to him. He just continued to get worse by the day, though.

I wanted to give him a chance at life. He was only 13. That’s too young. I wanted to make sure we did everything possible to help him. It was just beyond anything we could do. Maybe he wouldn’t have suffered at all, but I had to know there was nothing we could do before I let him go. He was family.

On his last day, I thought it would be easier. He was so sick. I knew it was better this way. But it was the worst day. It has been the worst week. I thought I was ready, but nothing could have prepared me for the moment the vet said, “Okay, he’s gone.” I can still see the way he was lying there. I can still feel the stiffness of his skin when I kissed him and pet him for the last time. I can still hear my own cries I let out when the doctor left the room. Okay, he’s gone.

I gave him one last head scratch. It didn’t hurt him anymore. But he wasn’t there anymore, it wasn’t the same.

After he was gone the doctor said his eyes were still open, but I didn’t look. I couldn’t remember him like that. I just wanted to remember him alive and maybe I could pretend he was if I didn’t have to look at his face.

One of the things I keep thinking was that I didn’t give him enough love. That’s all he ever wanted and sometimes I would be annoyed and push him away. He was so aggressive with his loves. He got his hair all over me. Why did that even matter? Now that he’s gone I ask myself why I would ever push him away when I would give anything now to love him again. To give him all the head scratches he wanted. It’s so simple and easy.

On his last night, I went to the gym of all places. Sitting there on the couch I felt so guilty that I wasn’t spending his last hours with him. I knew that every minute that went by was just bringing me closer to tomorrow. That made me really upset. At this point he was peeing on everything so we had to confine him to the bathroom. He couldn’t spend his last days in any kind of comfort. That made me really upset.

I need to find comfort in knowing Max wouldn’t want me to feel guilty. He was so very loved and I’m sure he knew that. We were both very lucky to have found each other. Instead of feeling guilty, I have to choose to be thankful every day for spending 14 wonderful years with the best cat in the world.

I talk about getting another kitten, but I can’t even imagine having another new kitten. No one can replace Max. He was too special. He was such a good boy.

Max taught me a lot of things. He taught me to return the kind of love he gave and extend that love outwards to everyone. He taught me that our time with our loved ones is fleeting and you never know when and how early it could come to an end. He taught me that when you spread love, you will touch everyone’s lives. He gave me and our whole family an infinite love that I will treasure forever.

Thank you for all the joy and love you’ve brought to our family, Maxwell. I will love you forever my sweet boy.